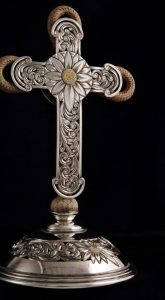 EMBELLISHING A HORSE AND RIDER with precious metal is a tradition as old as man on horseback, and deserves the respect of being done one piece at a time by hand, says silver/goldsmith, Scott Hardy. The marrow of that quote cradles the worship-like passion Hardy has for the art of cowboy culture, but it also hints at the deliberation and discipline he has practiced for the past 17 years as a founding member of the Traditional Cowboy Arts Association (TCAA). When he and fellow southern Albertan and saddle maker, Chuck Stormes, rode their predominately self-taught, and some would say, God-given talents past the rising wave of parodied western items on the market from cheap mass-produced bits and spurs, to tacky dishes with brands imprinted on them, and blue velvet boxes holding silver knock-offs they were grave in their focus, choosing to honor their work by residing it on a higher plain. One where tradition is built upon, not mocked with China-made reproductions. So it was that along with a handful of like-minded American craftsmen, the TCAA was founded, with a mission statement expressing something to the effect of a dedication to preserving and promoting the skills of saddle, bit and spur making, silversmithing and rawhide braiding.

More than a decade and a half later of accolades, advances and successes have built the TCAA into an association with serious creed, and Hardy himself has been honored with such quintessential Canadian honors as a Canadian postage stamp bearing a buckle he designed for the Calgary Stampedes centennial, and a long list of seriously prestigious accomplishments and commissions from celebrities and collectors. Yet the fifth generation stockman, who hangs his hat at a place in the hills just east of the cowboy town of Longview, Alberta, remains modest with a deep worry for the future of the cowboy arts in the modern West.

I dont know if the people truly understand the trouble that the industry (cowboy arts) is in right now, and if they dont realize it soon, it could be too late, he says.

The problem is one of technology advancement cut with a general decline of interest in the cowboy arts. Production pieces have simply become better and cleaner, and that leaves the true artisans, between the proverbial hammer and anvil: cheap, but affordable production work and a softening cowboy arts market.

If we dont create a market out there where there are collectibles, where a young maker can come in and get knowledge and see a place to end up, like the National Cowboy & Western Heritage Museum in Oklahoma [home of the annual TCAA Exhibition and Sale], where the work is recognized not only as functional working cowboy gear, but also art. When its taken to that level, its easier for a young artist to see a viable future in it.

Exactly why the TCAA has fostered its arms of support to new artisans. Personal mentorship, workshops, scholarships, fellowships and an annual Emerging Artist Competition, the winner of which receives both cash and national recognition, are a few of the benefits of membership in the TCAA. For the up-and-comer artisan, these reins of support, coupled with seeing your mentors work sincerely recognized with high-dollar values, can lend an early artist just the sort of boost he or she needs to focus on building their own reputation in the cowboy arts world.