THERE’S SOME SPECTACULAR MOUNTAIN SCENERY OUTSIDE SCOTT HARDY’S SILVERSMITHING STUDIO, and he’s got big windows on all four sides to maximize the views and inspiration. To place you geographically, he’ll tell you it’s 45 miles south of Calgary, in the beautiful rolling foothills of the Canadian Rockies, by the little town of Longview. “If you’ve ever seen Open Range, Legends of the Fall, or Unforgiven, they were filmed right around here,” Hardy says. “I can trailer my horse and be in the mountains in 15 minutes. I ride a lot. I always have and always will.” 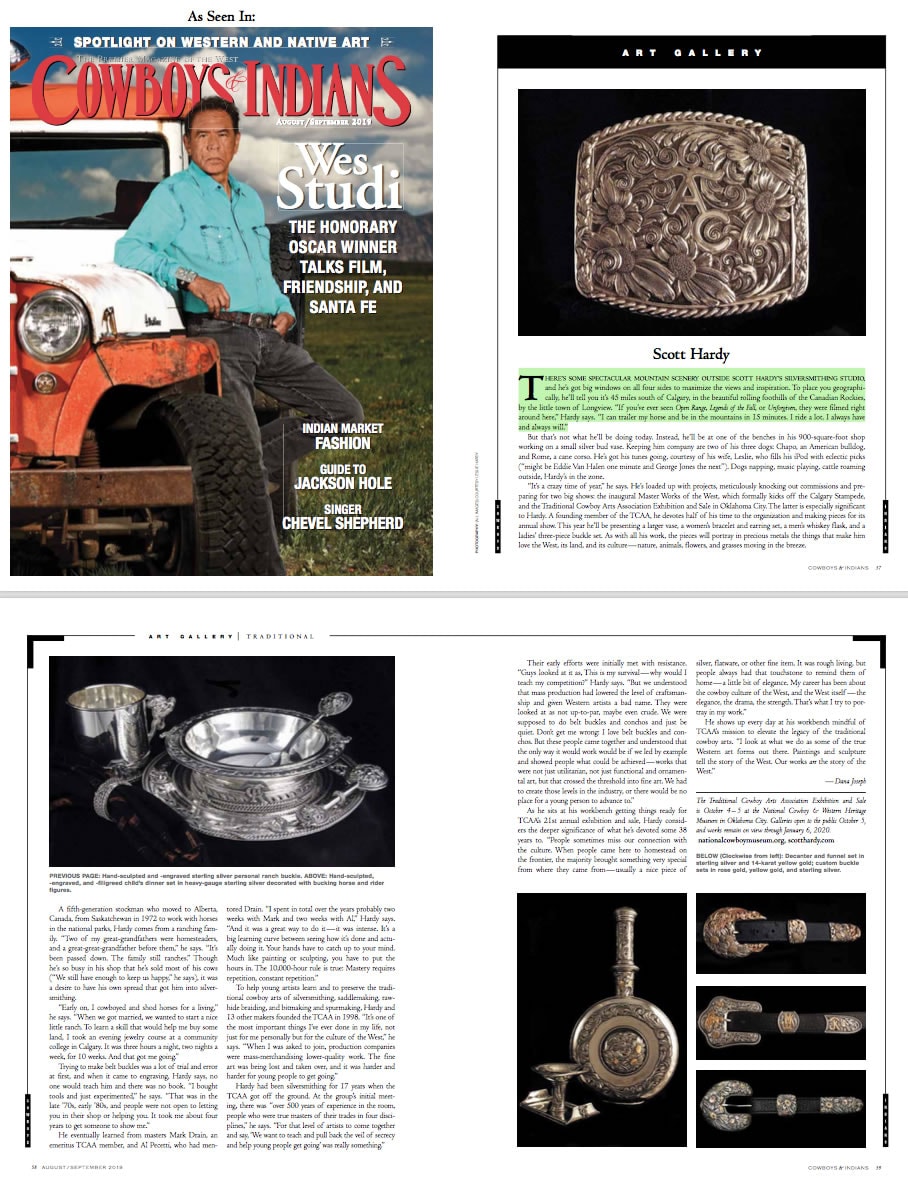 But that’s not what he’ll be doing today. Instead, he’ll be at one of the benches in his 900-square-foot shop working on a small silver bud vase. Keeping him company are two of his three dogs: Chapo, an American bulldog, and Rome, a cane corso. He’s got his tunes going, courtesy of his wife, Leslie, who fills his iPod with eclectic picks (“might be Eddie Van Halen one minute and George Jones the next”). Dogs napping, music playing, cattle roaming outside, Hardy’s in the zone.

“It’s a crazy time of year,” he says. He’s loaded up with projects, meticulously knocking out commissions and preparing for two big shows: the inaugural Master Works of the West, which formally kicks off the Calgary Stampede, and the Traditional Cowboy Arts Association Exhibition and Sale in Oklahoma City. The latter is especially significant to Hardy. A founding member of the TCAA, he devotes half of his time to the organization and making pieces for its annual show. This year he’ll be presenting a larger vase, a women’s bracelet and earring set, a men’s whiskey flask, and a ladies’ three-piece buckle set. As with all his work, the pieces will portray in precious metals the things that make him love the West, its land, and its culture — nature, animals, flowers, and grasses moving in the breeze.

A fifth-generation stockman who moved to Alberta, Canada, from Saskatchewan in 1972 to work with horses in the national parks, Hardy comes from a ranching family. “Two of my great-grandfathers were homesteaders, and a great-great-grandfather before them,” he says. “It’s been passed down. The family still ranches.” Though he’s so busy in his shop that he’s sold most of his cows (“We still have enough to keep us happy,” he says), it was a desire to have his own spread that got him into silversmithing.

“Early on, I cowboyed and shod horses for a living,” he says. “When we got married, we wanted to start a nice little ranch. To learn a skill that would help me buy some land, I took an evening jewelry course at a community college in Calgary. It was three hours a night, two nights a week, for 10 weeks. And that got me going.”

Trying to make belt buckles was a lot of trial and error at first, and when it came to engraving, Hardy says, no one would teach him and there was no book. “I bought tools and just experimented,” he says. “That was in the late ’70s, early ’80s, and people were not open to letting you in their shop or helping you. It took me about four years to get someone to show me.”

He eventually learned from masters Mark Drain, an emeritus TCAA member, and Al Pecetti, who had mentored Drain. “I spent in total over the years probably two weeks with Mark and two weeks with Al,” Hardy says. “And it was a great way to do it — it was intense. It’s a big learning curve between seeing how it’s done and actually doing it. Your hands have to catch up to your mind. Much like painting or sculpting, you have to put the hours in. The 10,000-hour rule is true: Mastery requires repetition, constant repetition.”

To help young artists learn and to preserve the traditional cowboy arts of silversmithing, saddlemaking, rawhide braiding, and bitmaking and spurmaking, Hardy and 13 other makers founded the TCAA in 1998. “It’s one of the most important things I’ve ever done in my life, not just for me personally but for the culture of the West,” he says. “When I was asked to join, production companies were mass-merchandising lower-quality work. The fine art was being lost and taken over, and it was harder and harder for young people to get going.”

Hardy had been silversmithing for 17 years when the TCAA got off the ground. At the group’s initial meeting, there was “over 500 years of experience in the room, people who were true masters of their trades in four disciplines,” he says. “For that level of artists to come together and say, ‘We want to teach and pull back the veil of secrecy and help young people get going’ was really something.”

Their early efforts were initially met with resistance. “Guys looked at it as, This is my survival — why would I teach my competition?” Hardy says. “But we understood that mass production had lowered the level of craftsmanship and given Western artists a bad name. They were looked at as not up-to-par, maybe even crude. We were supposed to do belt buckles and conchos and just be quiet. Don’t get me wrong: I love belt buckles and conchos. But these people came together and understood that the only way it would work would be if we led by example and showed people what could be achieved — works that were not just utilitarian, not just functional and ornamental art, but that crossed the threshold into fine art. We had to create those levels in the industry, or there would be no place for a young person to advance to.”

As he sits at his workbench getting things ready for TCAA’s 21st annual exhibition and sale, Hardy considers the deeper significance of what he’s devoted some 38 years to. “People sometimes miss our connection with the culture. When people came here to homestead on the frontier, the majority brought something very special from where they came from — usually a nice piece of silver, flatware, or other fine item. It was rough living, but people always had that touchstone to remind them of home — a little bit of elegance. My career has been about the cowboy culture of the West, and the West itself — the elegance, the drama, the strength. That’s what I try to portray in my work.”

From the August/September 2019 issue.