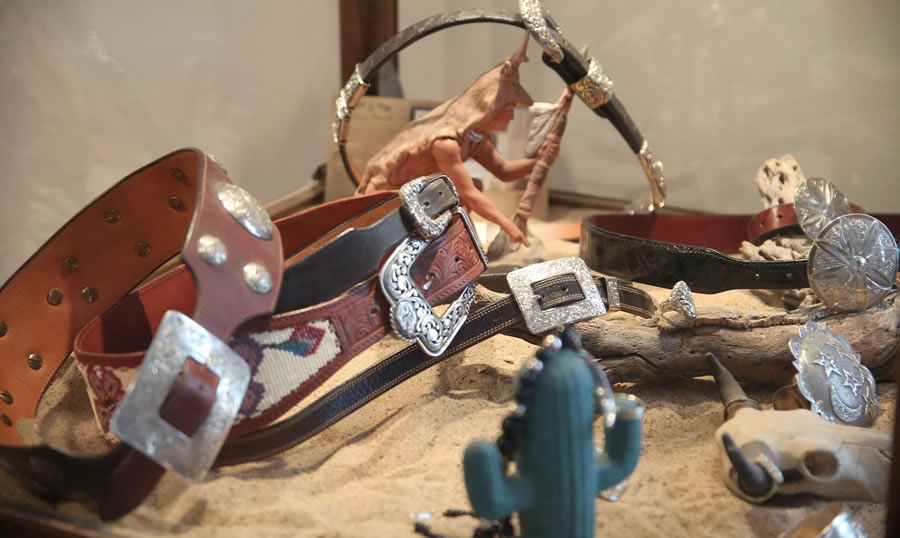 A collection of belt buckles created by Silversmith Scott Hardy. He said it can take as much as 65 hours to create a three-piece silver buckle set.

Becoming a highly respected and sought after western artist and craftsman was not in Scott Hardy’s plans as he enrolled in a silver working class more than 35 years ago.

It was the start of a career and commitment to bringing a sense of re nement to the cowboy arts to honour centuries of western tradition. Decades of dedication to his craft have seen Hardy’s intricate creations make their way from the Calgary Stampede to the National Cowboy and Western Heritage Museum in Oklahoma City, to private collections and a very small number of galleries to, just recently, the Vatican.

It’s a passion and a challenge he has come to love, and it was not what he would’ve expected. “Quite honestly I took that course so I could earn money, buy land and become a rancher,” said Hardy. “It was going to be a part-time thing. Well, that changed. I fell in love with it.”

Hardy does raise about a dozen head of cat- tle on a quarter-section of land near Longview, but most of his time is spent in his workshop. 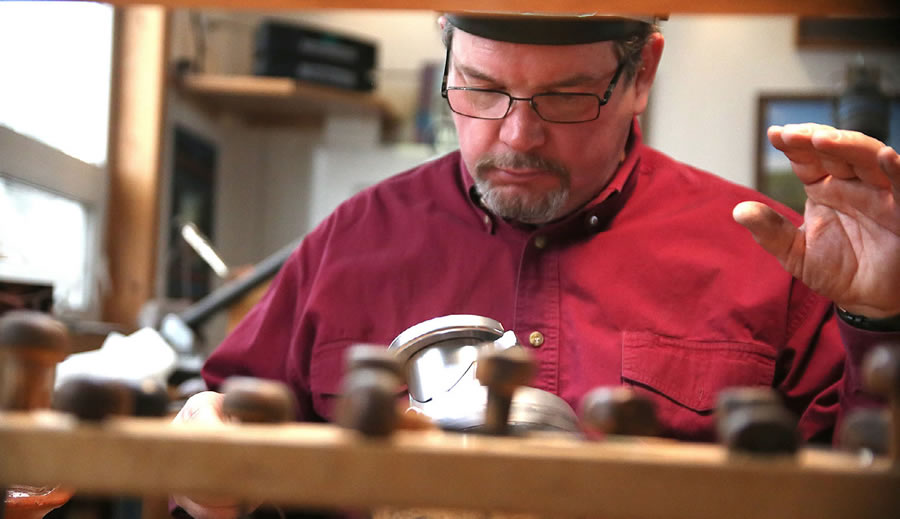 Western Silversmith Scott Hardy said it took him eight years to master the skill of engraving intricate designs in silver and gold.

It looks more like an industrial shop than an artist studio with a metal lathe, presses and a metalworking station suf cient to melt gold and silver. A drafting table and workbench covered with engraving tools and circles of silver carved with owers and leaves reveals the full range of Hardy’s skill set forged over more than three decades. More than an artist, he is part fabrica- tor, metallurgist and metalworker, part jeweller and engraver.

Starting with sheets of silver and die molds of his own creation, Hardy’s silver creations take shape. Gold ingots are melted down to create small bars of 18, 14 or 10 karat gold which are rolled out into sheets to be cut and soldered in place. A myriad of small tools allow Hardy to carve intricate owers, leaves and scrolls.

The vast majority of his work is done by commission. Hardy doesn’t deal with many gal- leries, aside from an annual traditional cowboy arts show and sale at the National Cowboy and Western Heritage Museum.

Hardy admitted he didn’t have an artistic background in his youth while growing up in Dundern, Saskatchewan in a family with ve generations in ranching and agriculture.

“Our family was always involved in agricul- ture out there, they still are as a matter of fact,” he said. “I was raised on horseback, moving cows, having fun.”

Hardy moved to Alberta in 1971 and worked as a packer and guide in the mountains, where he remained until 1978 when he met his wife. He took on a variety of jobs and trades, from horse- shoeing to welding and working on oil and gas rigs to earn a living.

Looking to carry on his family’s agricultural heritage, Hardy enrolled in a beginner’s silver working course at then Mount Royal College
in Calgary as a way to earn extra money. He attended two, three-hour classes a week for 10 weeks before going on to open his own business 35 years ago. 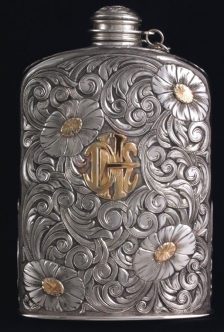 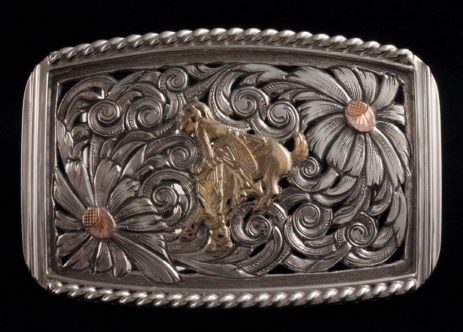 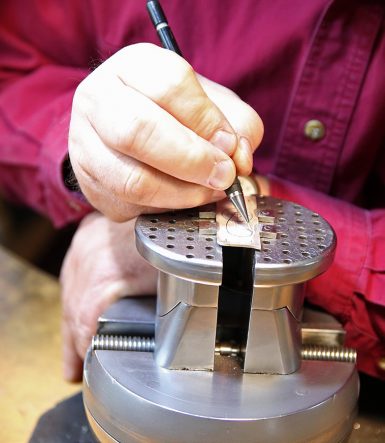 Scott Hardy traces out a ower and scroll on a small sheet of silver before engraving. 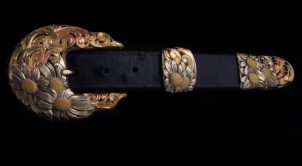 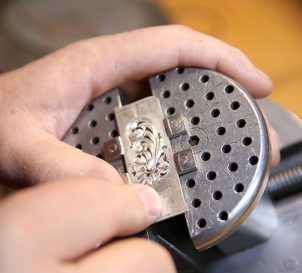 Western Silversmith Scott Hardy said it took him eight years to master the skill of engraving intricate designs in silver and gold. 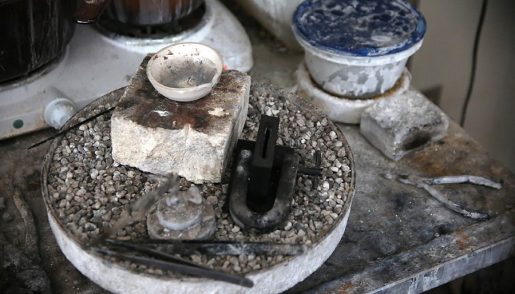 Silversmith Scott Hardy has built a diverse skill set over 35 years that includes fabrication and metalworking. He melts gold ingots down to create his own sheets of 18K, 14K and 10K gold. 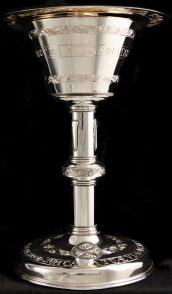 “This is my 35th year and I feel like I’m just beginning,” he said.

It took Hardy eight years just to become pro- cient as an engraver – a skill that needs to be practiced regularly to retain.

“Now I’m known as one of the best in North America and it’s because I do it every day, I liter- ally do it six days a week,” he said.
Hardy has had little in the way of formal edu- cation and training. Aside from the Mount Royal course and the support of a small group of men- tors, he honed his skills by trial and error.

Hardy said he was lucky to be mentored in the early years of his career by two respected western craftsmen – Al Pecetti, a silversmith from Reno, Nevada with 60 years in the trade before he died in 2004, and Al Tietjen, a renowned bit and spur maker from Reno who died in 2009.

They gave Hardy some valuable advice.

“They both said the same thing, these trades deserve respect,” he said. “Pick one, learn every- thing you can about it and take it as far as you can take it.”

Ever since, Hardy has voraciously consumed any knowledge that would help him learn about his craft. Art, composition, architecture, antiques, the work of old craftsmen and modern gun engravers, he pulls inspiration and knowledge from a diverse range of sources.

It was a book about famed jeweller Tiffany and Co. given to Hardy by his grandmother that inspired a watershed moment in his career. It became a source of many ideas that took his work to a new level of quality and intricacy. Ever since, Hardy has strived to bring that sense of re ne- ment to everything he creates.

Western art is a tradition all its own, he said.

Its roots can be traced back to Mexico after Spanish colonization and the earliest ranches, said Hardy.
“It’s all tied to the land, it’s based in nature,” he said.

The traditions moved from the south to the north across North America as cowboys and ranchers settled and worked new land. As ranch- ing and cowboy traditions evolved and thrived in the western portions of North America, so too did the trades and skills of western, he said.
“You don’t nd western silversmiths or west- ern saddle makers in eastern Canada because they never really fell into the trade,” he said.

When he was starting out as a silversmith, Hardy said there was little respect for western art and craftsmanship even among its practitioners.
It’s something Hardy has worked to change as an artist and founding member of the Traditional Cowboy Arts Association, which was formed to promote education and direction for traditional cowboy trades.

For Hardy, it’s a rich heritage and one he works hard to ensure it will endure.