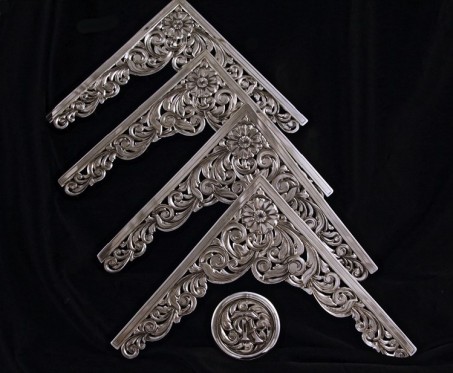 These solid sterling saddle corner plates are made from heavy 14 gauge silver. 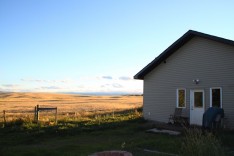 Scott Hardy’s shop looks out over the vast Alberta plains. 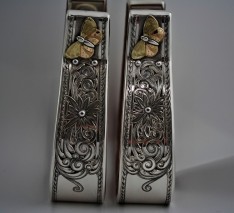 Scott only uses precious metals in his work like these sterling stirrups with gold butterflys. 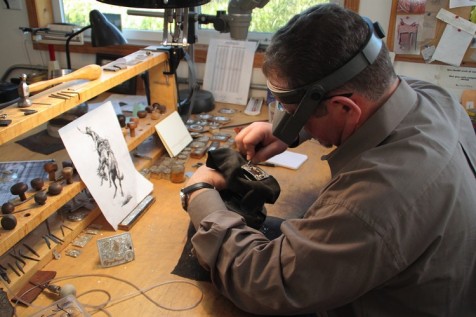 Scott is shown working on the 2012 Calgary Stampede Centennial buckles. There were one hundred made, and although this picture was taken in 2013 , Scott still had a few to make. 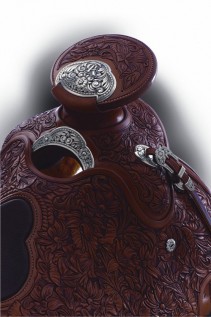 Even a touch of really good silver can enhance an already beautiful saddle. 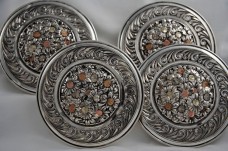 These conchos show what can be achieved with the contrast of gold on silver, as well as the randomness of the flowers against the flow of the scroll work. 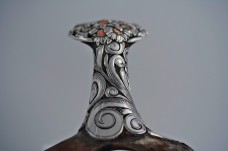 Scott created an unusual saddle horn by covering the neck with scroll work and the cap with a bouquet of gold and silver flowers. 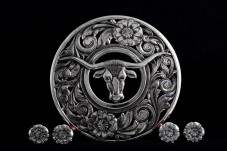 Scotts unique style is demonstrated well in this filigreed horncap with matching conchos.

The plains around High River, Alberta, Canada, run open into the mountains to the west. The grass is abundant, and the towns are sparse. The reality of the West is obvious here. If you stop in the little town of Black Diamond for coffee, and directions, you can buy some incredible pastries from French speaking bakers. A couple of doors down is a saloon with a stock trailer in front of it. Heading south, and a couple of long, straight, roads later, you’ll find a small shop atop a hill, with an incredible view. Inside this studio, Scott Hardy works at producing the very best silver that he can.

Many years ago,Scott Hardy was doing a multitude of jobs. He was packing and welding, both good trades to have in ranching country, and trying to save enough money to buy some land for a ranch. That’s when he decided to become a silversmith.

“I said to myself, “silversmithing would be an easier way to do it because they all get rich don’t they””, laughs fifty seven year old Scott.” So thirty five years later, I’ve got my land.”

Scott started out wanting to work with silver as a hobby. It was hard to find someone to help him get started. He studied work in magazines, took a jewelry course at a community college, and then had the good fortune to meet saddle maker Chuck Stormes. In 1983, Stormes sent him to Cliff Ketchum who was mainly a saddle maker, but who also did silver work. Scott spent a week with Ketchum, and when he came home, Scott got to work. He called Ketchum on the phone and sent him work to critique. Two years later Chuck arranged for Scott to go to well known silversmith, Mark Drain’s, and Scott spent a week with him. Scott spent a week with Drain, and then went back again later. A visit with silversmith Al Pecetti, in Reno, followed. These guys were some of the best in the silver business, and they pointed Scott in the right direction.

“That was my formal teaching, the rest was just trial and error”, says Scott.

Scott started out by making trophy buckles. Trophy buckles had started out originally as the plaques on the backs of the oversize bronc riding belts that were awarded in rodeos .At rodeo’s beginnings, they were made by craftsmen who tried their best to produce a work of art that would immortalize the victory, and the rodeo, forever. By the Eighties, making trophy buckles was the only way a silversmith in Alberta could make a living. There were a lot of roping clubs and rodeos that needed prizes. Eventually Scott started doing some horn caps for saddles, but there wasn’t that much demand for custom saddle silver.

One day in 1987, Scott had a cup of coffee with a local production trophy buckle maker. He told Scott that he had to get back and fill an order for 250 buckles at $85.00 a piece. At the time Scott was getting $100.00 for a trophy buckle that took him a day and a half to build.

“I decided that it was time to get away from the rodeo buckles, and get into the custom stuff. It was a big decision in my career.”

Scott decided to be the best that he could be. He studied art and composition, and various styles of engraving. He studied companies like Tiffany, and a lot of great silver companies that never expanded into western products. He studied more modern companies that did, and found that they used “western” as an excuse to be crude. This never sat well with Scott because he found that high quality silver had been an integral part of the West. For example, the King Ranch had been decorated by Tiffany and Co. Many of the ranches in Alberta were founded by European nobleman who brought with them an appreciation of silver. Scott remembered holding his great grandmother’s silver tea service, with the incredible workmanship, which she’d brought over from England. He continued to learn on his own, and Chuck Stormes continued to critique his work.

“It was the only way to get better back then. The TCAA has changed that now with their fellowships, scholarships, and workshops”, says Scott who is a founding member of the TCAA.

Scott feels that people in the high end Western industry need to pay close attention to the world, and how things are being produced. The trend seems to be for a large portion of traditional style work to become production, or slightly above this. The higher quality is approaching a more artistic level. As the divide grows, it becomes more difficult for a custom saddle maker, or silversmith to compete, or find a place at the table. This makes it harder for a young craftsman to get started.

” I believe the days of just getting good enough to build cowboy saddles are coming to an end. If a guy is standing in a large retail store, and he’s looking at a saddle for $1400.00 and one for $3600.00, and he can’t tell the difference, he’s going to buy the cheaper production saddle. It’s frustrating to see the term fine quality tooling come to mean that someone’s pulling a lever.”

Scott thinks that this problem can only be solved by education of both the maker and the buyer.

” You have to be a good business man to survive in this business. Most of the guys who started out when I did aren’t around anymore. The guys that said I was too expensive are the ones that are gone. You have to price stuff so that if something happens, and you have to go buy a new graver, you can. I’ve been told that I’m the most expensive guy in this field, and that blows my mind because I’m just getting by.”

Scott has seen guys doing really good silver work and selling it for less than he could buy the materials to do it. He contrasts this with doctors, lawyers and even plumbers, who get paid enough so that they don’t have to worry about the cost of doing business, and can concentrate on being the best in their fields.

” If you’re just trying to get a job done so you can pay some bills, you can’t reach your full potential in your work. It’s to your customer’s benefit that you do. I want to build silver for Donn Leson’s or Cary Schwarz’s saddles that someone will look at in a hundred years and say, “Damn that’s nice””.

” Cliff Ketchum used to say to me, “Figure out how you want to live and price back from there””.

Scott sets his prices and lets his customers come to him rather than the customer dictating what his prices should be.

Scott’s saddle silver has become fun for him because he collaborates with the saddle makers to make his silver tie in with their designs. He also feels that a fine saddle is a sculpture, and should be seen as such. He likes making silver gullet covers which he forms on the saddle tree itself. Scott’s 1 1/2 inch solid sterling silver engraved conchos start at $135.00 each. He uses heavy 16 gauge solid sterling for his saddle conchos. For other saddle silver he uses 14 gauge. He feels that if a horse rubs on it, it won’t dent or bend and can be polished out. Scott uses 14 and 18 carat gold for trim as well. The 14 carat is used on men’s buckles as well because it stands up the best. The 18 carat has a brighter, contrasting, color. The closer you get to pure or 24 carat gold, the softer the metal is. Figures are cut out by hand, and then hand sculpted.

Scott recommends using a silver tarnish cloth for polishing saddle silver routinely. A buff cloth is more than enough to polish every week for horse shows. A soft cloth should be used to finish it but never a paper towel. Some of the liquid cleaners are too aggressive for this much polishing unless something is really dirty.

Scott works in a 1024 square foot shop that he built a few years ago. In the front is a small gallery showroom for the customers, and the rest of the building houses the shop. This room is comfortable for Scott, and is decorated with the things he likes. There are lots of windows, and skylights, for good light, and a great view of the Canadian plains. One of his sons, Colter, also works on silver in the shop, although his projects are less traditional and incorporate things like skulls in their design. He makes some beautiful, personalized dog tags. His other son, Tyne, also works on silver occasionally as a hobby. The shop has multiple work stations, and is roomy enough for several people. Aprons underneath the work areas catch all the scraps of silver and gold.

Scott left home to work on an outfitters in the mountains. Today he still has eight or nine horses, and runs a few Longhorn cows on his small ranch. The house that Scott and his wife, Leslie, live in, is only a short walk away from his shop. When he has time, he still likes to ride in the mountains with friends.

“If I couldn’t look out my window and see a horse, I don’t know what I’d do”, says Scott.

Scott’s work has been recognized by his peers. In 1994, he won Best of Show at the Cowboy Poetry Gathering in Elko, Nevada. In 2001 he won the Will Rogers Award for Engraver of the Year. In 2006, Scott was invited to the Smithsonian as a representative of Western Heritage and Craftsmanship in Alberta. In 2009, one of his three piece buckle sets was chosen to be displayed at an international craft exhibition in South Korea. In 2012, Scott was chosen to make the limited edition belt buckle for the Calgary Stampede’s Centennial. The buckle ended up appearing on a Canadian postal stamp.

“I love the West and I love to do silver and gold work. I want to do work that will still be here in two hundred years”, Scott reflects.