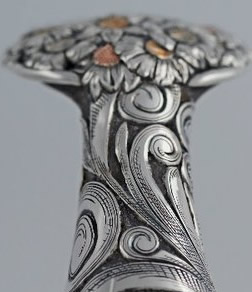 Over the years I have found there are three questions that I am routinely asked:

Here are my answers to these questions, I hope you find them interesting!

Where I grew up bits, spurs and buckles were common place, just part of life. None of our gear was anything special so to be honest I never paid attention to it other than for function. Of course buckles were different, they always make a statement about who was wearing them, who you were, who you wanted to be and who you thought you were! I think for that reason they aways intrigued me.

I also watched two parades a year on TV, one the Calgary Stampede Parade and the other The Rose parade. I would sit there mesmerized by the beautiful horses all decked out in the most incredible headstalls, bits, silver saddles and martingales, to me it wasn’t gear anymore it was art! I wondered who made them? Where did they come from? To me they just seemed magical.

One day I was at my Great Grandma’s house, for some reason I was looking at things in her China cabinet and came across this incredible Silver tea pot. Grandma saw me looking at it, took it out and handed it to me then told me how her family had brought it from England. I stood there totally amazed wondering how could a person create this!

The beautiful parade horses and tea pot always stayed in the back of my mind but I was determined to make my living horseback.

After years of doing just that Leslie and I were married and wanted to buy land of our own. Reality told me I would have to do something else for a while to make that happen. I shod horses, worked on oil rigs, pipeline, and welded. I didn’t mind any of those jobs but also didn’t like any of them. I was welding for my step father in Calgary when I came home one night(we lived on an acreage just west of Calgary) Leslie had a continuing education magazine open to a page that offered a beginning night course for Silversmithing, there hours an night for two nights a week with ten weeks in total.

I completed the course and was blown away! I took the second course, loved it. I emptied a room in our basement converting it into a shop. I thought if I could build up a cliental, that would allow me to quit welding, eventually buy land and be able to ranch and silversmith together.

Theory was great – reality was hell of a lot harder.

What I had learnt at the night course all pertained to jewelry, buckles and horse jewelry is constructed out of heavier material, it takes more and different types of heat, fluxes, soldering techniques, etc. I could find Jewelers but No Western Silversmiths to ask for help. I bought any books I could find, they helped but it still boiled down to trial and error.

Another element that differentiates Western Silversmithing is bright cut engraving. At that point in time no one taught this, there were no courses or schools, you literally had to find someone in the trade and ask them to teach you, in the late 70s -early 80s shop doors were closed!

I found at least one book on lettering engraving but couldn’t find any on bright cut engraving. The supply house I  dealt with found a catalog from which I ordered various gravers and handles. I searched for photos in magazines and catalogs, studied them, spending hours upon hours trying to mimic the items, it was incredibly frustrating.

What I considered a huge break came when I met Saddlemaker Chuck Stormes. I think he could see the desperation and desire in me, so taking pity he introduced me a great Jeweler, Silversmith and man by the name of Jim Hanna. I owe both Chuck and Jim a lot because I relentlessly peppered them with questions – it was like someone opened a door.

In the early 80’s Chuck introduced me to Cliff Ketchum who agreed to let me come to his shop to learn basic engraving. He charged $100.00 per day plus I had to buy three meals a day for both of us. We had no money but we scraped it together, Les and I both felt it was a great deal! Three years later with hundreds of hours of practice and direction from Cliff, Jim and Chuck, Chuck introduced and recommended me to the great engraver Mark Drain. That was 1985, Mark agreed to let me come to his shop for three days at $150.00 per day, I still to this day think it was the best money I ever spent. One year later I went back to Mark for another three days so in total my formal engraving training was five days with Cliff Ketchum and six days with Mark Drain.

Not long after I was at Mark’s the second time, I met Al Pecetti at an Art show in Arizona. Al was the greatest Western Silversmith of his generation in my opinion I was incredibly honoured when he invited me to come spend time in his shop. In the end I spent a total of two weeks in his shop working on fabrication and filigree.

As far as the Silversmithing, my so called formal education consisted of one hundred and twenty hours of night courses along with the 2 weeks  spent in Al Pecetti shop. At that point in time for me  the only other alternative to learn Silver/Goldsmithing was a four year full time course ,which was out of the question. First reason finances, second the course mainly dealt with jewelery.

I do have to add though there always were a lot of books on Silversmithing which really help but as I said earlier nothing on bright cut western engraving.

That is the why and how answered, now the advice how a beginner can start.

A lot of the above story is why the Traditional Cowboy Arts Association was formed. We saw the level of craftsmanship falling with less and less young people coming into the disciplines because of the close door policies of most craftspeople. For any trade, craft or art to flourish and grow ,experience ,knowledge and information has to be abundant! Every member of the TCAA teaches, some mentor one on one, some teach group workshops, most do both. Instead of having to find a way for someone to introduce you to a craftsperson who may or may not let you come to their shop you simply enrol in their work shop. The TCAA offers beginner, intermediate and advanced workshops at different times in all four disciplines – Western Silversmithing, Bit & Spurmaking, Saddlemaking, and Rawhide Braiding. Along with that many other craftspeople who have opened their doors to teach.

Most major centres have art collages that also offer night and weekend courses, there are private schools that offer extensive five and six week courses to do with precious metals, engraving, etc. The internet and self publishings have created another new avenue for knowledge that is fantastic and available to anyone world wide. All this new found excessible knowledge is changing the world of Western Craftsmanship.

Of course the access to knowledge is great and welcomed but with all this somethings never change, in my mind the journey has steps, Beginner- Craftsperson- Master Craftsperson- Artist. The easiest step is the first, the hardest is the last.

Even with all the help available today you need the three “D’s” to succeed – DESIRE- DEDICATION and DISCIPLINE.